Tessera HD processors (M2, T1 and S4) must be running processor firmware V2.3.2 or later prior to upgrading to V3.0.1 or later.

The packs included with 3.1 support new functionality, meaning they are not compatible with 3.0 or earlier releases.
BETA Firmware advice

Please note – this software version is still in development.

Full release notes will be published in due course. Please contact support if you have any immediate questions, feedback, or encounter any bugs.

Although this beta version has been tested, we do not recommend using beta versions of our software for live or critical shows, as there may still be instabilities in the software.

For the latest stable version of the Tessera Processor software, please see our Downloads page.

Tessera HD processors (M2, T1 and S4) must be running processor firmware V2.3.2 or later prior to upgrading to V3.0.1 or later, or the upgrade will fail requiring a SD card restore.

PureTone builds on Brompton’s Dynamic Calibration technology to enable each panel type to be profiled to measure the panel’s behaviour across the entire brightness range. PureTone then compensates for any non-linearities, ensuring true, clean, accurate colours and neutral grey scales. PureTone has been an available feature since software version 3.0, but has been updated in v3.3 to include support for per batch measurement.

Rental companies know all too well about the problems of matching different batches of LED panels. Despite being the same type and being calibrated to the same brightness, colour temperature and colour targets, all too often a new batch of LED panels will be noticeably different at low brightness when displaying real world content. This is often because of low brightness non-linearities, which per batch PureTone is designed to correct.

PureTone measurements only need to be taken using a single panel per batch of LED inside a dark room. That allows a profile to be generated which can be used for the entire batch. Measurements are made using a kit available from Brompton Technology – contact your sales representative for more information.

Once you have obtained a PureTone profile for a specific batch of LED, uploading this information to the panels is done by using the processor user interface. 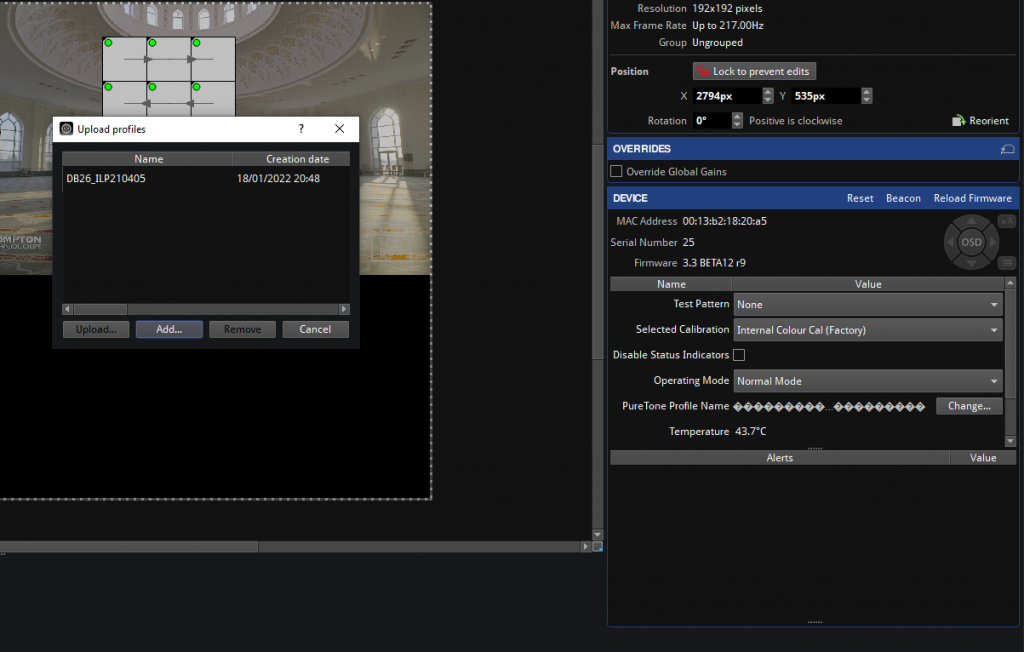 Insert a USB stick containing the PureTone profile into the processor, then in canvas mode, select the corresponding panels and in the Device window on the right hand side, press the Change.. button to display a window where the user can select and upload the newly created PureTone profile.

For more information on availability of the PureTone equipment and the process please contact support@bromptontech.com

LED panel design is all about trade-offs between different aspects of visual performance. Pushing for a faster refresh rate may mean reducing PWM bit depth. Increasing maximum brightness may compromise low brightness performance. Panel manufacturers seek to achieve a good balance, and that one-size-fits-all configuration is set for the life of the panel.

But what if your particular application means you care more about one aspect of performance than others? Why shouldn’t you be able to choose a configuration that meets your particular requirements? Well, now you can with Operating Modes, available from Tessera version 3.3 onwards.

All panels will have a default operating mode that aims for a balance across all aspects of performance – suitable for general-purpose use. But where appropriate, we can now support alternative operating modes for a panel type that prioritise a particular aspect of performance, and users can switch between modes instantly from the processor’s user interface, inside the Device window of a selected LED panel. 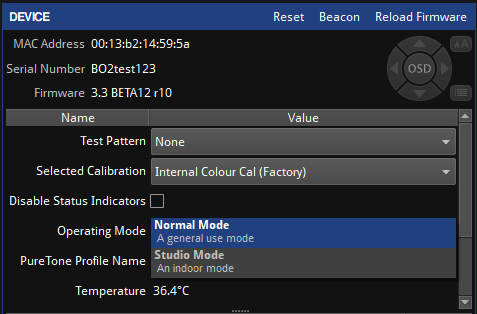 Studio Mode is a long-standing Tessera feature allowing users to sacrifice maximum brightness in order to increase bit depth for better performance at low brightness. Studio Mode is now just one of numerous possible Operating Modes that allow tailored performance for particular situations. Each Operating Mode can also store its own PureTone correction, to ensure colour accuracy whichever mode you are using.

Not every panel type will instantly have lots of operating modes. We will work with panel manufacturers to create new modes where we see a clear opportunity to increase one aspect of performance beyond what is possible in the default mode. Users can contact our support team to enquire about adding other operating modes if they have a specific requirement.

From v3.3, Brompton SX40 and S8 processors, used together with R2 receiver cards, support the use of on-screen tracking markers for use with the Mo-Sys StarTracker system. The StarTracker system usually uses retroreflective marker stickers which are typically positioned on the ceiling – and this is an issue in volumes where there is an LED ‘roof’ overhead.

The markers are automatically generated and overlaid on the video content being displayed, with the ability to configure colour and size of the markers from within the processor UI.

Frame Rate Multiplication is used to display the markers on the output frames that are not visible to the main camera.

As with Frame Rate Multiplication there are processor capacity implications due to the higher output frame rate used to display the video content and overlaid tracking markers.
The StarTracker system, camera system, video content source and processors must be genlocked together.

The StarTracker camera must be pointing at the LED screen that you wish to generate a tracking marker starfield on and must not have an IR filter fitted.

To generate a StarTracker starfield click the ‘Enable StarTracker’ checkbox in the StarTracker section in Network property editor. It will also be necessary to switch on the Frame Rate Multiplication section. Increasing the multiplier increases the number of frames that you can choose to have the markers on. 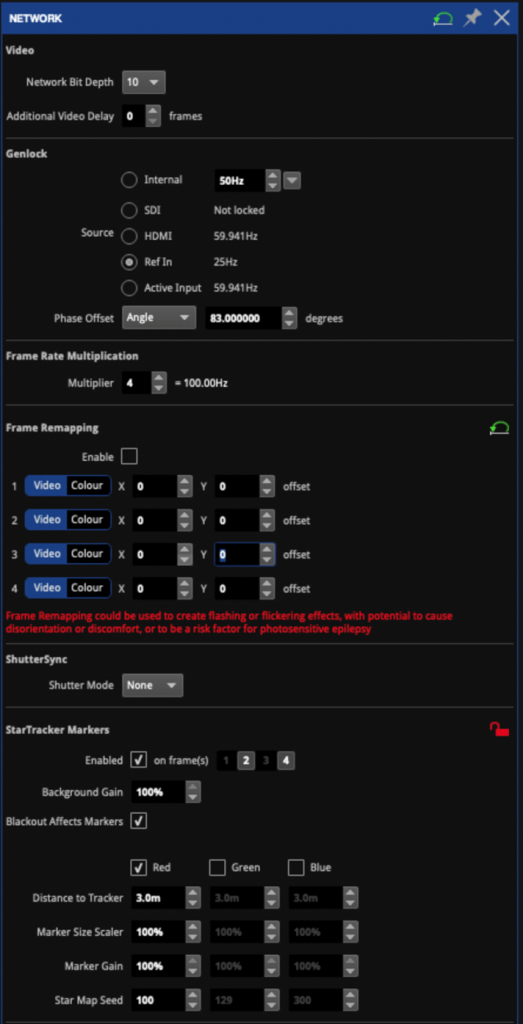 In this example the digital cinema camera frame rate is 25 fps. The camera and LED processor are genlocked together with Trilevel Sync Reference In at 25Hz. The Frame Rate Multiplier is x4 which gives an output frame rate of 100Hz. The tracking markers have been selected to be displayed on frames 2 and 4 of the sequence of 4 frames. This gives good performance on camera as well as the markers being completely flicker-free to the eye on the LED screen.

Blackout Affects Markers: If this option is unticked, the blackout function will only affect the video and not the markers. 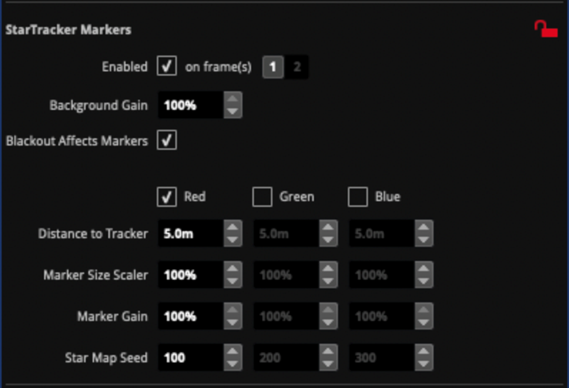 Distance to Tracker: This is the distance from the tracking markers to the StarTracker camera.

Marker Size Scaler: This scales the size of each marker without changing the position of the tracker or layout of the StarTracker star map. This is different to changing the Distance to Tracker value which would affect each markers position.

Star Map Seed: This is the seed value that is used by the random number generators in each panel. Changing the seed will change the position of each marker for that colour. Using the same seed on two different processors allows the same star map to be generated. Using a different seed will force a different star map on each processor. 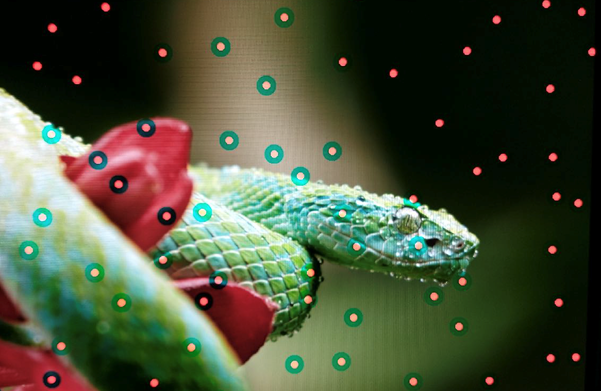 The SX40 and S8 processors now support the ACEScg colour space, which uses the ACES AP1 wide -gamut primaries. By supporting ACEScg and AP1 primaries, colour space conversion can be avoided in the source device, which avoids potential losses in precision and gamut reduction.

When using AP1 the video input can be encoded as SDR, PQ HDR or HLG HDR. NB scene-referred (linear) ACEScg is not supported.

ACEScg is automatically detected using HDMI InfoFrames by the processor when sent from a source over HDMI 2.0. ACEScg can also be selected manually in the same way as other colour spaces.

ACEScg can be selected by clicking on the ACEScg tab.

ACEScg is also featured in the Dynamic Calibration screen. 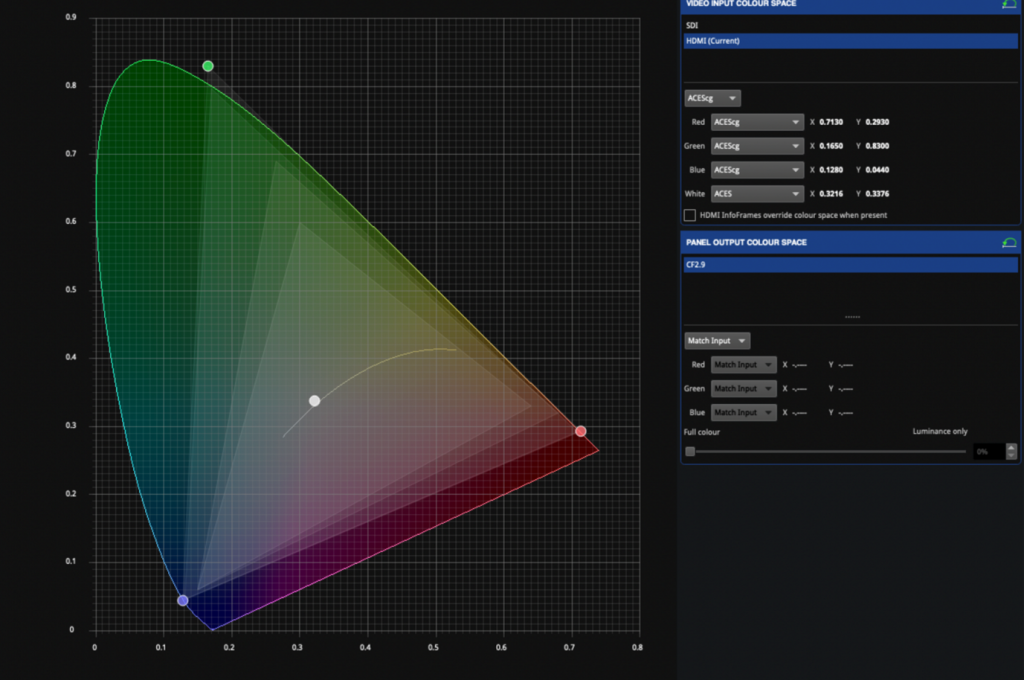 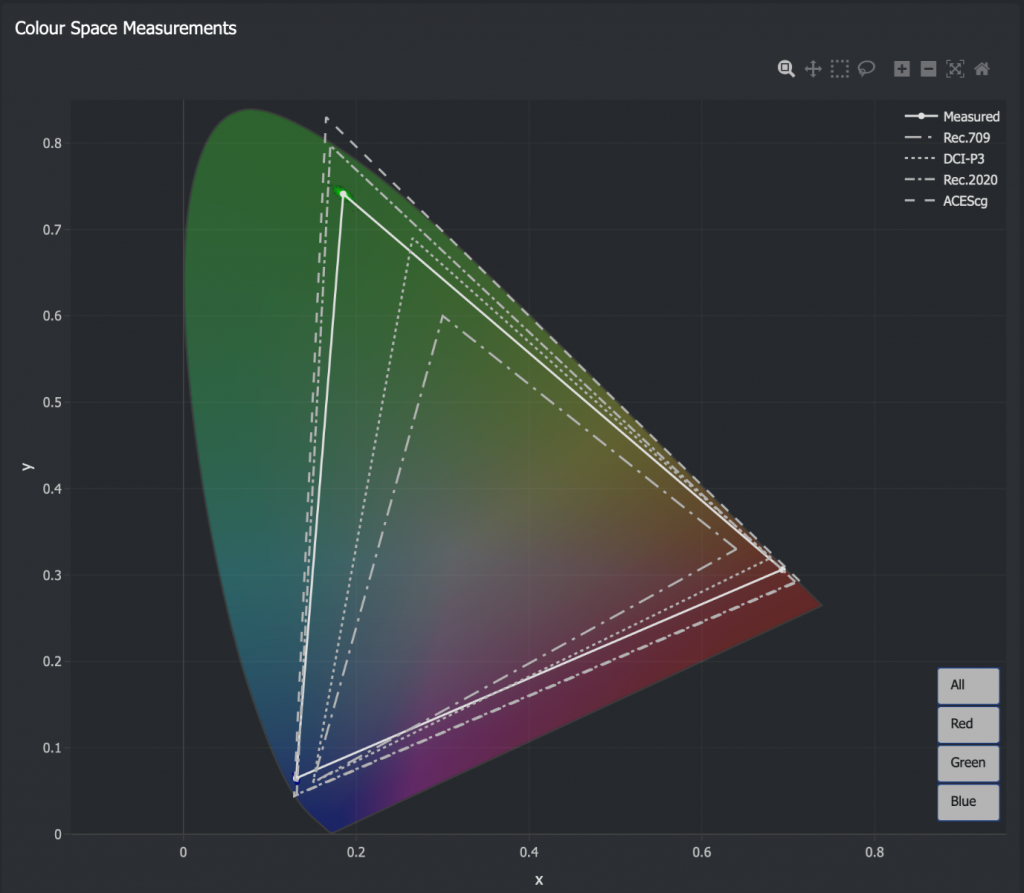 Version compatibility
In order to use V3.0.1 or later, it is necessary to run all elements of the system (processor, XDs and panels) on V2.3.1 or later. For panels where V2.3 firmware is not available please continue using V2.2 processor firmware.

Restore factory defaults/format SD card can cause fixture library instability
​If you perform either of these operations please reboot your processor before browsing to the fixture library window as this may otherwise be unstable.

Tessera Remote and Tessera Control may not work on Mac OSX El Capitan
When running on a Mac OSX El Capitan the Tessera Remote and Tessera Control applications can fail to detect network ports. This appears to be limited to cases where no default gateway is specified on the computer’s network interface. In situations where no default gateway is set using DHCP, we recommend specifying a default gateway manually. PCs running Windows and Macs running OSX Yosemite or earlier are not affected.​