Metallica, the biggest heavy metal band on the planet, has just completed its European summer festival run with The Return Of The European Summer Vacation tour, which saw the band playing at some of Europe’s most anticipated music festivals including Copenhell 2022 (Denmark), Download Germany, Hellfest Summer Open Air (France), Rock Werchter (Belgium) and NOS Alive (Portugal). With a total of eleven shows held between June and August, Metallica’s long-term production partner Production Resource Group, LLC (PRG), turned each event into an epic visual experience both for the in-person and streaming audiences by providing a custom LED set-up of ROE Visual panels and Brompton Technology LED video processing. 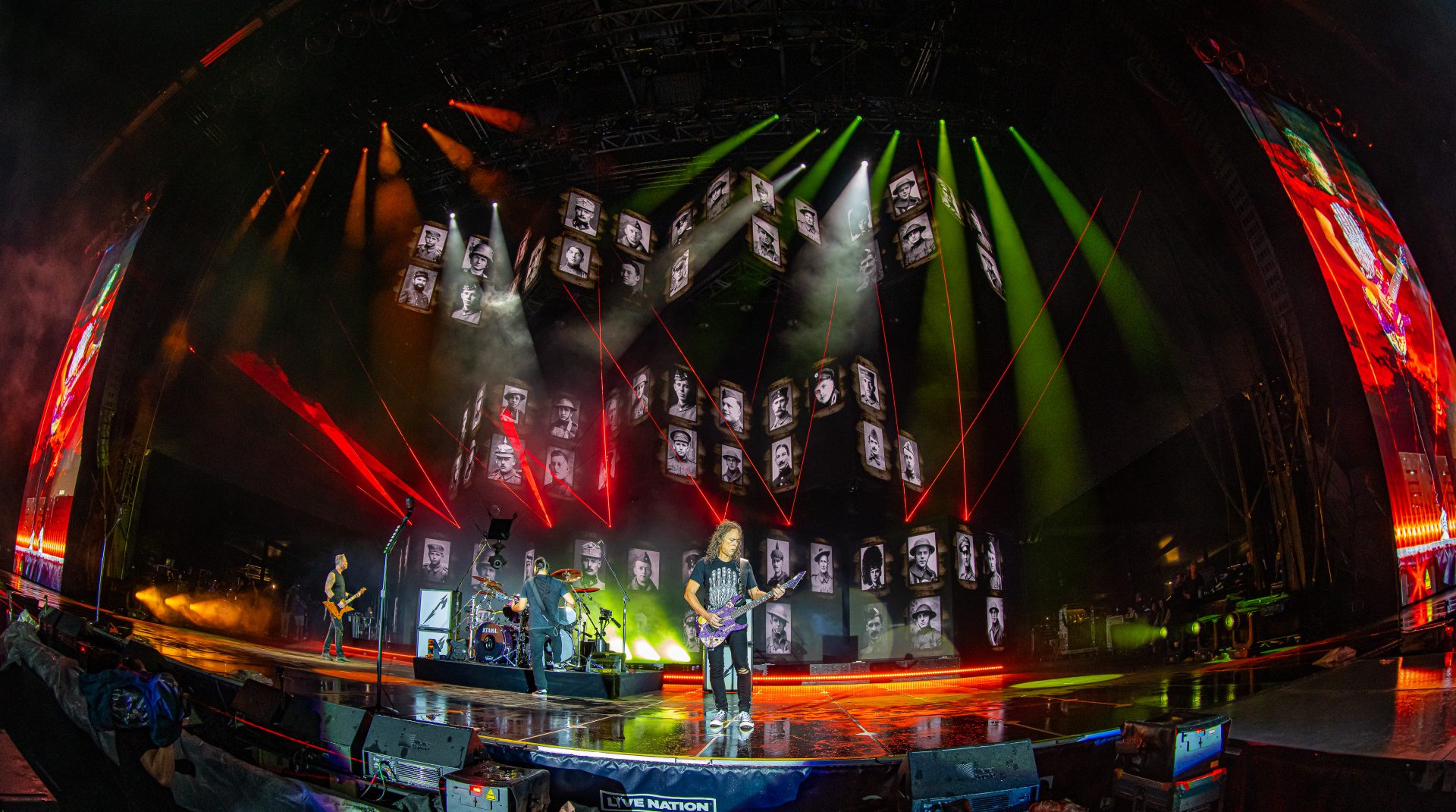 PRG has worked with Metallica for over a decade, supporting them on tour and providing custom design work to deliver the fascinating LED configurations the band’s fans have experienced throughout the years.

For Metallica’s The Return Of The European Summer Vacation tour, PRG partnered with Metallica and combined ROE CB5 LED panels with Brompton’s industry-leading 4K Tessera SX40 LED processors, which the company has been using for a number of years.

“Brompton LED processing has delivered the same processing power for the different configurations we’ve used during the tour, which gives us a real sense of security,” says Gene McAuliffe, Video Director & Engineer for PRG. “Tessera SX40 offers by far the best colour and brightness control of any processor, so we can always get our screens to match, which is especially helpful with the live streams and the TV broadcasts.” 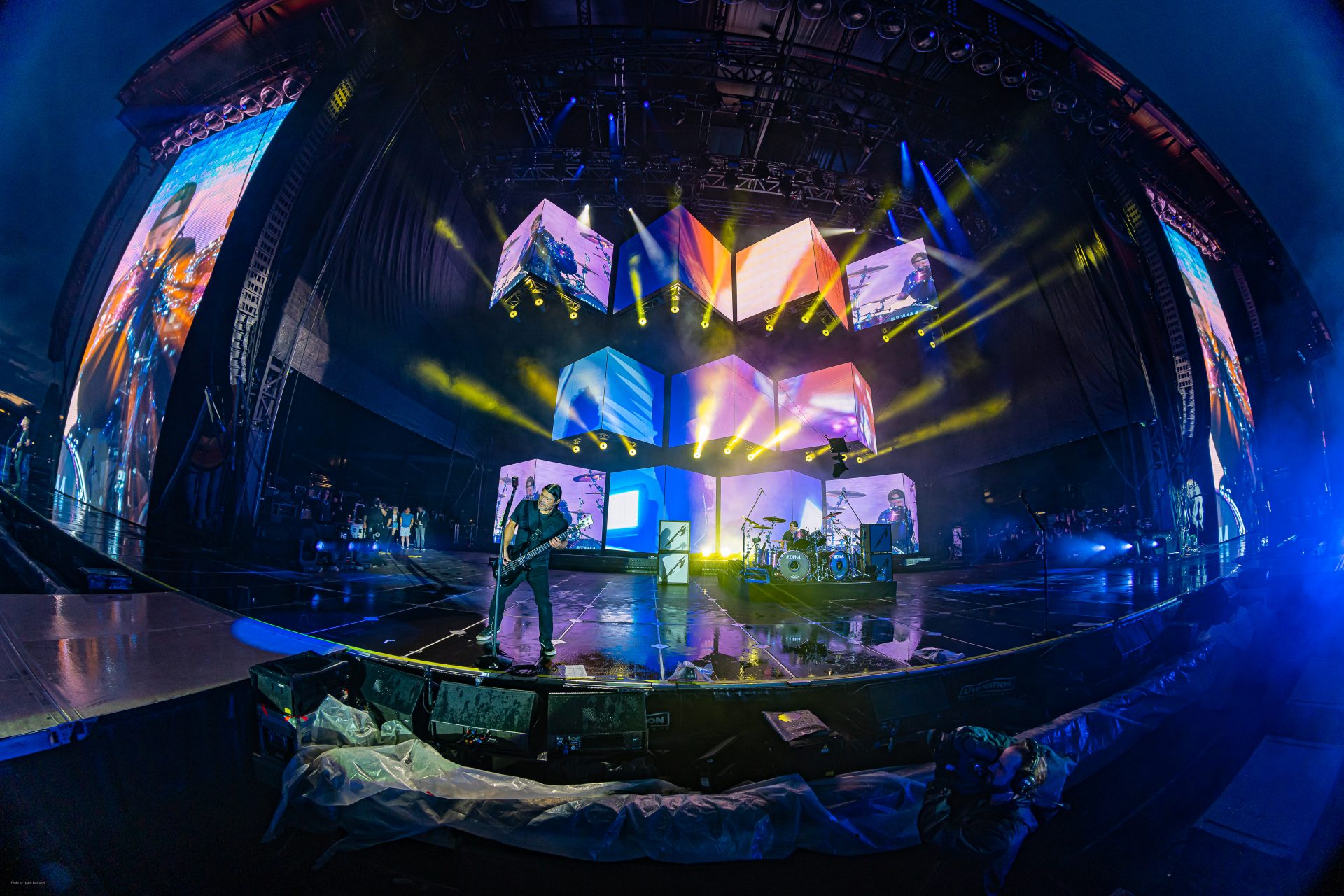 McAuliffe recalls how good it was to arrive at Rock Werchter, considered one of the best rock festivals in the world, and see the house side LED screens were also running on Brompton LED processing. “Because the show was broadcast on TV and watched by millions of people, having Tessera SX40 powering all the screens really helped us get everything looking uniform. This was particularly important as we mixed and matched content and live cameras across the screens. It offers a solid, authentic look across the entire set-up, which is very valuable and keeps both management, the client, and most importantly the fans happy,” he adds.

PRG worked with show designer Dan Braun to construct eleven LED chevrons, each measuring six metres across, which were suspended above the band at different levels. The side screens measured a whopping 14 metres by 9.5 metres each, so image consistency was vital.

A Brompton feature the team found particularly useful was On Screen Colour Adjustment (OSCA), which allowed them to quickly match panels, regardless of the panel model or if they were from different batches. “Colour adjustment is a great feature to have, especially touring Europe in the summer,” says McAuliffe. “All the shows start in daylight, and we progress through sunset and into the night. Being able to make adjustments throughout the show has been very helpful, particularly as we can change the brightness as the ambient light levels drop without sacrificing the colour.” 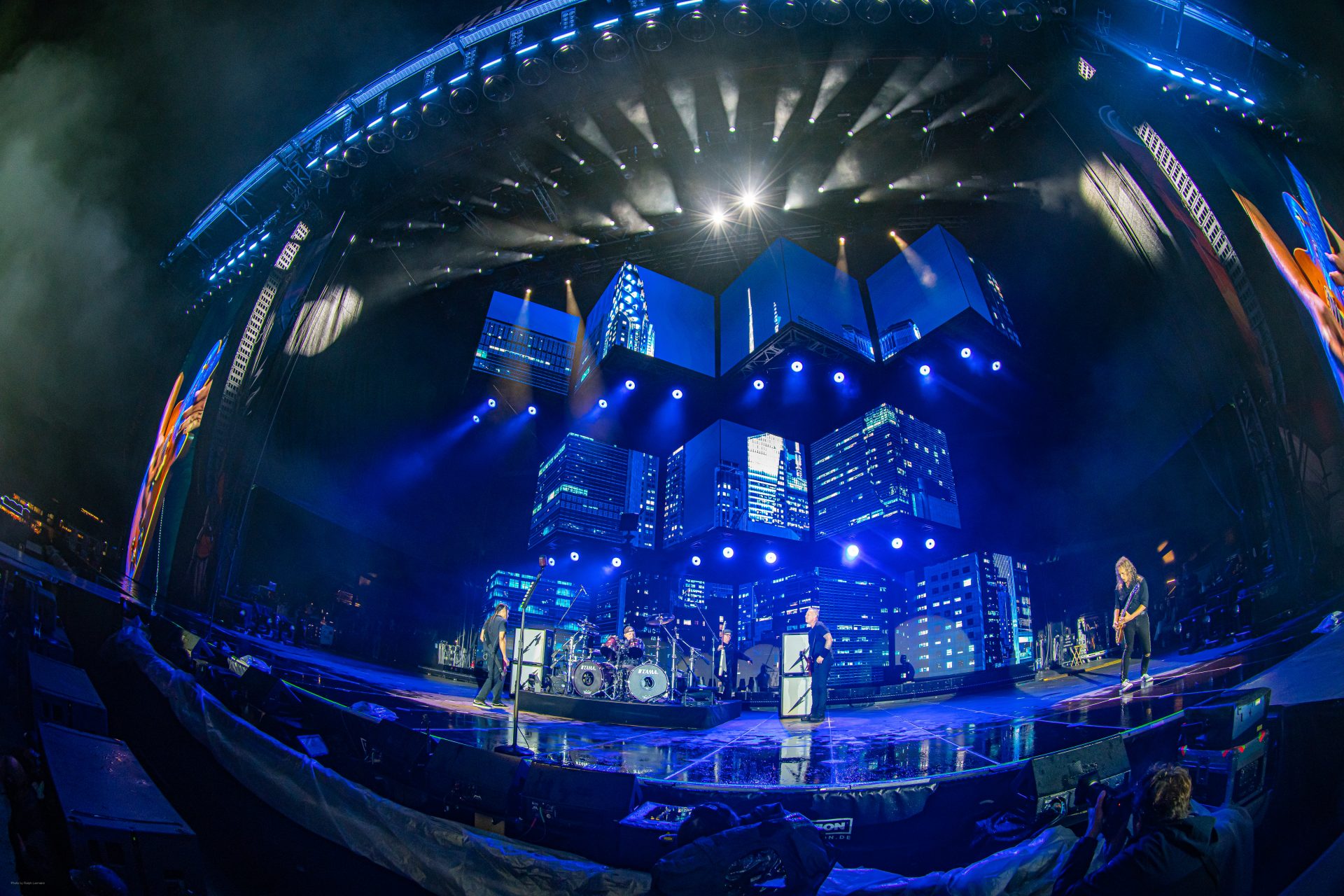 Jeroen Hallaert, vice president for production services at PRG, worked closely with McAuliffe on achieving Dan Braun’s original LED concept for the tour and notes that the design for the European tour was based on the set-up for ACL Music Fest 2018, where Metallica headlined and for which PRG had designed and supplied custom LED chevrons in a non-touring configuration.

“After the show, which received a lot of praise from Metallica themselves, the audience and the band’s creatives, all loved the angular setup of the chevrons” explains Hallaert. “They brought the show right into the audience, and we were asked if we could provide a touring version. That was definitely a challenge as it’s a massive rig, both in terms of size and weight. But we love a challenge and developed a customised touring solution that has a quick build time, which is particularly important for a big rig like this one!”

Hallaert also shares McAuliffe’s views on the benefits of Brompton’s colour management features. “I used OSCA for the first time on U2’s Joshua Tree tour in 2017,” he adds. “It was a big step for PRG as we had introduced a new level of video processing with Brompton’s Tessera and a brand-new line of products from ROE Visual. During the tour, our Chief LED Engineer, Eric Geiger, gave Brompton a lot of feedback on the processors’ functionality. We’ve seen some of that come through in subsequent versions of the Tessera interface. So not only does Brompton produce highly engineered and well-developed products, they listen to their users. That’s what’s appreciated most by people on the road.

“We’ve had five different LED configurations during the tour, and we’ve been able to cope with that by just making minor adjustments in the mapping or the colour profiles,” adds McAuliffe. “It’s been seamless and that’s down to having a user interface that is easy for people to manipulate. It’s fantastic!”

With a sold-out festival season under their belts, it is clear to all concerned that the appetite for live music has not diminished.

“If anything, it’s increased,” concludes McAuliffe. “And with the addition of live streaming, a hybrid has been created. So, if you can’t make it to the live show, you can watch online and still get the buzz and excitement of the show. Being able to deliver that is thanks to the cutting-edge technology like Brompton’s LED processing. At PRG, we are thrilled to support this new event model and help it evolve further into the future of entertainment.”